The Great Proletarian Cultural Revolution is perhaps the most tumultuous chapter in contemporary Chinese history. It spanned roughly ten years, from 1966 to 1976. In the years leading to the Cultural Revolution, China was urbanizing at an incredible speed. Political elites and intellectual bourgeois emerged in urban areas after the success of economic development after the Great Leap Forward (1958-1962). Mao Zedong, Chairman of the Chinese Communist Party (CCP), also lost some political power due to his previous unsuccessful policies. Therefore, to consolidate his power and ideology, and continue the revolutionary momentum weakened by moderate policies and politicians in the CCP, Mao decided to mobilize the masses into a new form of revolution. With the support of the Gang of Four and Defense Minister Lin Biao, Mao carried out campaigns that used young revolutionaries called Red Guard to destroy old relics, especially those related to religion, and to persecute political rivals. The Red Guards broke into people’s homes to annihilate anything related to the Four Olds (old customs, old culture, old habits, and old ideas). This overreaction has caused irreversible damage to many important historical sites and artifacts.

Intellectuals and other urban residents were also sent to the countryside to gain revolutionary experiences, usually performing hard labour and living in harsh conditions. Due to this persecution and displacement of capable individuals, China’s economy sank into a quagmire, especially during the early phase of the Cultural Revolution.

During the second half of the Cultural Revolution, Premier Zhou Enlai revised some extreme policies and brought back some intellectuals to their respective positions, slowly lifting China out of the previous desperate situation.

In 1976, Mao died after a series of heart attacks. He received overwhelmingly positive praise and condolences from Communist, Capitalist, and non-aligned countries alike, except the USSR and ROC (Republic of China, or Taiwan). His death marked the official end of the Cultural Revolution, although the revolutionary spirit amongst Chinese youth was already diminishing in the few years prior.

Hua Guofeng (in power from 1976 to 1978), appointed by Mao before his death, became the new Chairman of China. He still believed in Maoism and a planned economy, but arrested the Gang of Four and blamed them for the downfall of the Cultural Revolution. He modified some previous policies but was still largely following the verdicts of Mao, such as the Two Whatever policies (We will resolutely uphold whatever policy decisions Chairman Mao made, and unswervingly follow whatever instructions Chairman Mao gave). The border also opened up, allowing foreign tourists to visit for the first time after the founding of the People’s Republic of China.

It was in this period that this travel brochure of Nanking from my collection, written in English and filled with propaganda targeting foreign tourists, was distributed. Let’s take a look at the brochure:

The front cover depicts the Yangtze Bridge of Nanking, constructed in 1968 and became a
landmark in Nanking and subject to propaganda ever since.

The first page briefly introduces the city of Nanking, with information regarding its demographics, geographical location, history, industry, and of course, in combination with catchy phrases that praise the CCP and denounce the KMT. The mention of Chairman Hua in the second last line shows that the brochure was printed in 1977 or 1978, during Hua Guofeng’s rule. 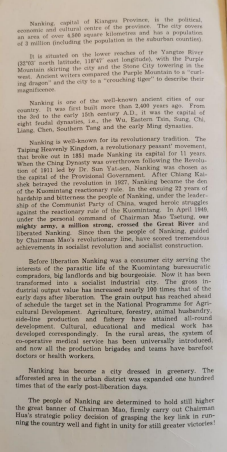 The large image on the second page depicts a guide introducing a group to the heroic acts of Premier Chou En-lai (Zhou Enlai) in front of his former home during the KMT rule. 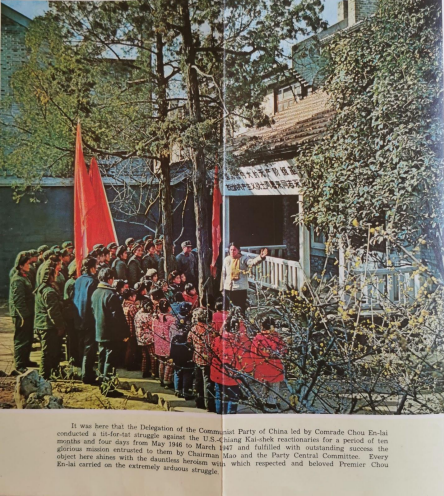 On the back of the image is the map of Nanking, with the location of various tourist attractions. 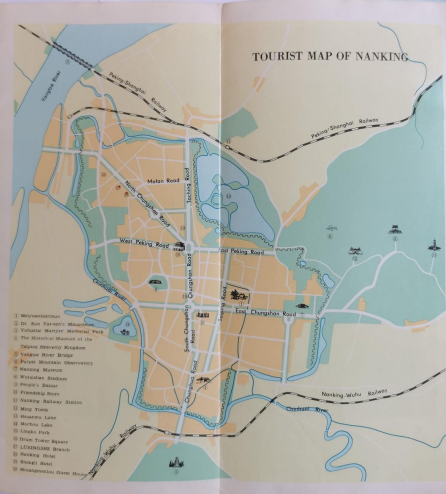 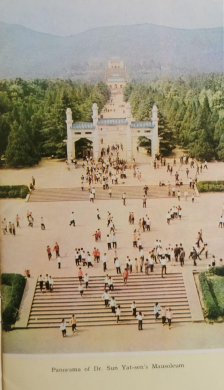 On the back shows a group of students marching to the Yuhuatai Memorial Park of Revolutionary Martyrs, the former execution site of communists under the regime of Chiang Kai-Shek, Sun’s chosen successor as the leader of the KMT. 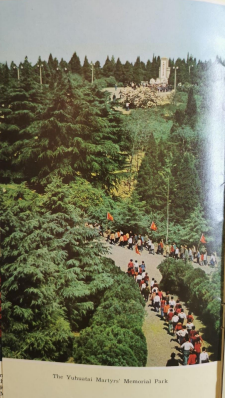 The fourth page conveys a different mood. The huge image on top and the image on the bottom right showcase China’s industrial capabilities. The bottom left image conveys that Nanking is historically significant in the revolutions against feudalism and the bourgeoisie, as the Taiping Rebellion was a peasants’ revolution against the aristocratic Qing government in the 19th century (the Taiping Army, however, differed from the CCP as they practiced Christianity while CCP was atheist). 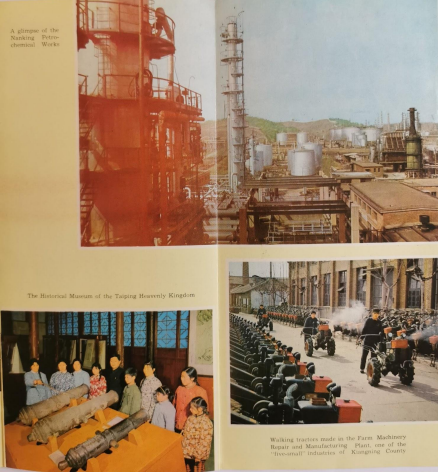 The back shows that China has also modernized. Its factories were capable of manufacturing high-tech products such as transistor radios, which were one of the first electronic devices that China was capable of mass-producing domestically. The Nanking Radio Factory was the pioneer in the development of such technology, and its “Panda” brand was one of the most luxurious domestically produced radios.

The shop in the lower right corner is filled with abundant merchandise that customers can choose from. All of these items in the store could not be bought with money, rather they had to be purchased with tickets designated to each type of item, issued by the government. Few people in China in the 70s bought ready-made garments in stores. Most of them would decide to buy pieces of fabric and wool and make them into clothes at home. The colourful pieces of fabric hanging down from the ceiling can be identified as Dacron fabric (or “的確良” as the Chinese would like to call it back then), the Gucci of 1970s China as it was both popular and expensive. The large bowls on top of the shelves are enamelware (搪瓷), another iconic item of 1970s China. Enamelware is made by applying a glass glaze coating onto a metal base, which is used to prevent rusting. 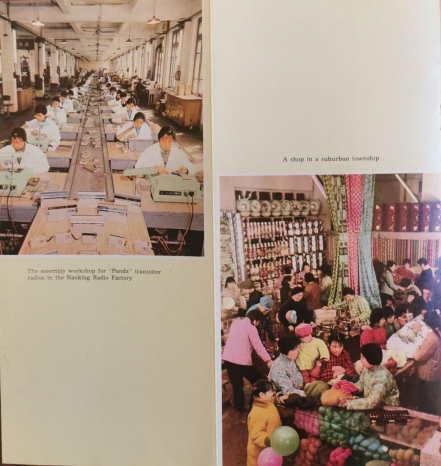 The fifth page includes the image of a university: Nanking University. Nanking University was one of the best universities in the 1970s and is still amongst the top 10 in China today. 1977 was significant in the educational history of China. It was the first time since the Cultural Revolution that students could attend universities solely based on merit — by participating in Gaokao, China’s university entrance exam. Between 1966 and 1970, China’s 43 universities were forced
to shut down. From 1970 to 1976, although students could attend universities, they would
require recommendations, something hard to get if the students’ families don’t have relations or are deemed politically divergent from communism. 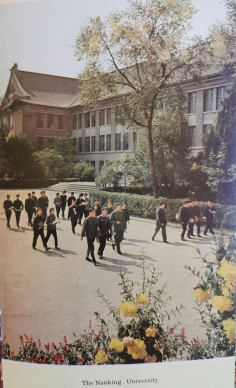 The back shows an image of the Nanking Museum and a famous object from the museum — a Han dynasty jade burial suit. Nanking Museum, built in the 1930s, was one of the first museums in China. Nanking was the capital of the Republic of China under KMT, so of course, establishing a museum there was deemed a priority. During the Second Sino-Japanese War (aka WWII), many of its artifacts were sent to the Southwest, then subsequently transferred to the National Palace Museum in Taipei when KMT lost the Chinese Civil War and fled to Taiwan.

The sixth page shows a people’s commune doing agricultural work. People’s communes are the largest collective units where people live and work together, like a township but with communist characteristics. The upper image shows people storing grains against war, either in preparation for the growing hostility between China and Vietnam (the Sino-Vietnamese War took place in early 1979) or simply a routine precautionary practice in the 1970s. The bottom image depicts harvesting wheat using heavy machinery, implying that China was no longer a backward agrarian society. 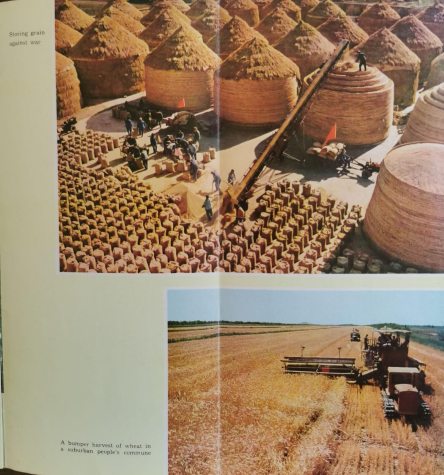 The back shows some scenery in Nanking, including a boulevard and a lake. There are very few vehicles on the road, but a lot of people walking. Private car ownership was not a thing in the 1970s. All the cars were state-owned and assigned only to selected government officials and state-owned company employees. 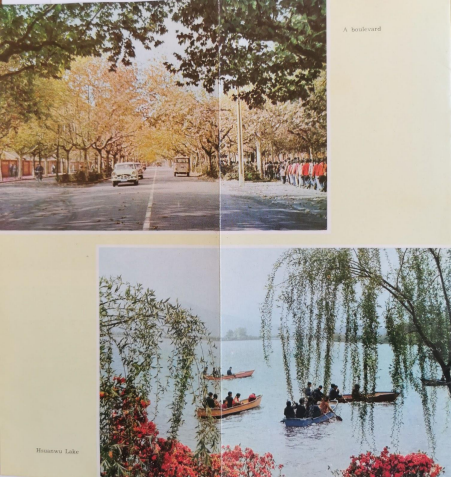 The front and back of page eight show a park with an ancient Chinese pagoda in the distance and a pavilion in the middle of a pond. 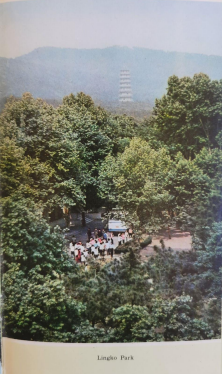 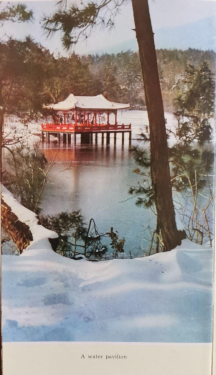 The ninth page showcases Nanking’s ancient heritage. The top image is a typical Southern Chinese garden, and the bottom is a road leading up to an imperial tomb from the early Ming dynasty (1368 to 1420). 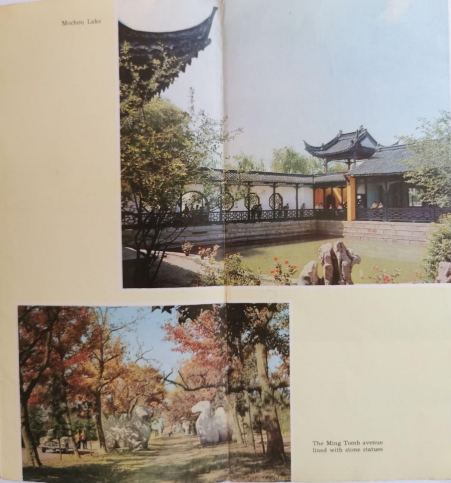 The back shows Nanking’s famous Purple Mountain Observatory, credited for discovering 149 minor planets before it was rendered obsolete in the 1980s due to light pollution.

Overall the brochure still depicts a Chinese society like that of the cultural revolution, with the iconic imagery of people in green uniforms gathered around and images of people’s communes. However, this brochure lacks the pervasive presence of red and communist symbols. The brochure showcases more about China’s history, contemporary society and industrialization rather than political ideology, sending out the message that China is ready to open up and move on, marking the start of China’s industrial and economic success in the next couple of decades.

Phillips, Tom. “The Cultural Revolution: All You Need to Know about China’s Political Convulsion.” the Guardian, May 11, 2016. https://www.theguardian.com/world/2016/may/11/the-cultural-revolution-50-years-on-all -you-need-to-know-about-chinas-political-convulsion?scrlybrkr=5f82fdf0. Sudan Kasturi, Charu.