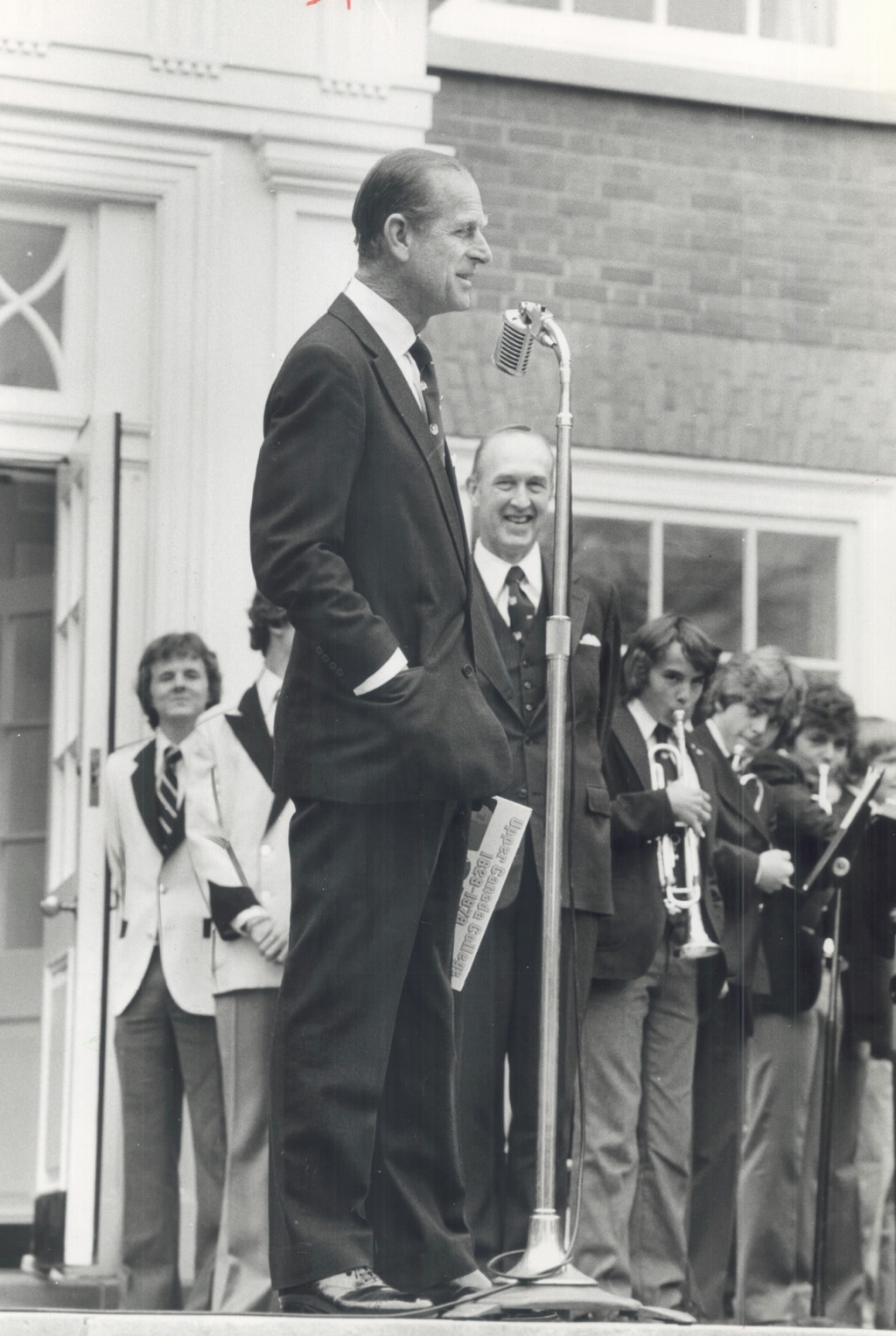 On April 9, 2021, the world received the sombre report of the passing of Prince Philip, Duke of Edinburgh and consort to Queen Elizabeth II. The news carried special weight for those of us in the Upper Canada College community, given Prince Philip’s long association with the UCC as its Official Visitor.

Prince Philip’s first visit, in 1959, certainly established a successful precedent for what was to be a long and productive bond with Upper Canada College. As reported in The College Times, “Long before he arrived, a large crowd of boys, parents, Old Boys and friends of the College lined the front drive,” with “Mounties in their scarlet, City policemen in their less picturesque blue and detectives in the plainest of plain clothes” all in enthusiastic attendance. All “spectators” reportedly “broke into a cheer” upon the arrival of the guest of honour, who was treated to a tour of newly erected buildings on campus and an unveiling of his recently affixed coat of arms in the Quad before being presented with a tie marking him as an Honorary Old Boy.

Our Official Visitor and Honorary Old Boy returned again a decade later to personally distribute the Gold Awards to the UCC recipients of his eponymous Duke of Edinburgh’s Award. However, it is the 1979 milestone “Jubilee” visit that jumps out most vividly from the archives. The “cold biting air” of late fall contrasted sharply with the warm hospitality enjoyed by Prince Philip during the much-celebrated visit honouring UCC’s 150th anniversary. The Duke was an active participant in what The College Times deemed a “crescendo of a fast-paced weekend” replete with events and festivities marking UCC’s sesquicentennial. A tour of the campus on Friday – during which Prince Philip reportedly wandered off on his own into the classroom of English teacher Mr. Pearce, who was conducting a lesson on the jazz artist Miles Davis – was followed by a later reception and formal Jubilee Banquet held at Exhibition Place. With over 3,000 attendees, the event, at that time, constituted the largest formal dinner ever held in Toronto. Prince Philip’s speech of that evening commended the unique nature of a UCC education grounded in a sense of integrity and moral service, and he spoke of UCC itself as a “‘Cooperative project’” undertaken by all members of the school community. There was certainly a note of wisdom in those words, which are just as relevant today as they were over 40 years ago. Finally, Prince Philip was on hand during the “wintry clime” of the following morning to distribute “mounted steins and T-shirts” to the winners of the First Annual Jubilee Association Run. He was even gifted his own T-shirt emblazoned with “HRH Prince Philip,” which UCC staff member Rodger Wright deemed a very good idea, as it would “save the Queen from having to sew a name tag on the inside of the collar.” The notable Jubilee visit culminated with “screaming spectators, 2000 strong,” who turned out to bid Prince Philip farewell.

Prince Philip’s fifth, and final, visit to UCC occurred in the autumn of 1993. Much like his first more than 30 years prior, this last “inspection” of the College was greeted with much fanfare, as noted by then-UCC Principal J. Douglas Blakey, who remarked in Old Times that Prince Philip’s “popularity and appeal remain as high as ever as we saw by the large numbers of the College family who turned out to greet him,” making the visit “one of the memorable events of the fall term.”

While we at Upper Canada College are saddened by the passing of  Prince Philip, we can take pride and inspiration from his long tradition of service to our community as its Official Visitor. Perhaps former headmaster and school historian Richard Howard expressed it best in his banquet address commemorating Prince Philip’s Jubilee visit to the College: “In the lengthy history of the College, no Visitor since our inception has taken such a deep interest in our affairs, for such an extended period, as has the present distinguished incumbent.”