The Major League Baseball season is just getting started, and there are many teams and players who will be very exciting to watch. This offseason, there have been many high profile players on the move. Notable examples include; Trevor Bauer going to the defending champion Dodgers, Gold Glove Infielder Francisco Lindor going to the Mets, Outfielder George Springer going to the Blue Jays, Blake Snell being traded to San Diego and Nolan Arenado being traded to the Cardinals. These moves have made the race for the World Series very interesting and I look forward to seeing how the season unfolds. 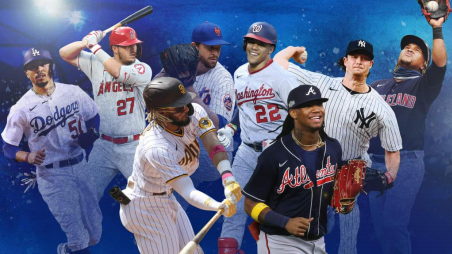 My pick for NL MVP is Juan Soto. Soto displayed unstoppable offensive and defensive skills in 2020 and since his rookie season, has only improved. I expect him to follow up his great 2020 performance, where he finished first in OPS and second in the batting title. He has been a dominant player for the Nationals and continues to be one of the prominent young stars in the MLB. Bryce Harper is another player which could take home the title. Harper showed major signs of improvement throughout the shortened 2020 season, launching 13 home runs in 58 games, putting him on pace for 37 in a full season. He’s also been taking some violent swings and launching balls in spring training. You can’t go wrong with Freddie Freeman, Trevor Story, Mookie Betts, Fernando Tatis Jr and Ronald Acuña Jr as potential MVPs- all players who have shown MVP-like talent during the last few years.

In the American league, my MVP pick is Aaron Judge. Offensively, Judge is just as good as anyone. He possesses the ability to launch baseballs to all fields, and when he is at the plate, he’s always a threat to do damage. Defensively, he can make the consistent plays, and has a cannon for an arm. When he’s on the field, he is a top 5 player. The main concern for Judge is staying healthy, as he’s missed 142 games over the past 3 seasons. But if he’s fully healthy, he will definitely be a contender. Other possible winners include Mike Trout, Jose Ramirez and José Abreu.

The Los Angeles Dodgers are coming off a world series championship and they come into the 2021 season being heavy favourites for a repeat. They’ve only gotten better, signing Cy Young winner Trevor Bauer, also adding Tommy Kahnle and re-signing Blake Treinen, two relief pitchers who add depth to a top-tier bullpen. The Dodgers have one of the most dominant offenses in the MLB. Cody Bellinger, Corey Seager and Mookie Betts – 3 of baseball’s top 30 hitters are featured in this Dodger lineup, not to mention clutch 3rd baseman Justin Turner, and power hitting infielder Max Muncy. The Dodgers have all the pieces to make another championship run. The Padres are another NL team which I expect to make a deep run into the playoffs. The Padres have the best rotation in baseball. Yu Darvish, Blake Snell, Dinelson Lamet, Chris Paddack and Joe Musgrove make up an elite rotation that will carry the Padres deep into the playoffs. The Padres offensive game is elite. 3B Manny Machado, young phenom Fernando Tatis Jr. as well as Trent Grisham and Eric Hosmer round out a solid hitting team for San Diego. The bullpen is a concern however, as the Padres don’t really have a shutdown guy to depend on – which could prove costly in close games. The Braves and the Mets also definitely have a shot at winning the NL.

The unfolding of the American League race will also be interesting to follow. The Toronto Blue Jays are a very exciting team coming into 2021. With Vladimir Guererro Jr, Bo Bichette and Cavan Biggio gaining experience, the young core of hitters could be a dangerous force in the AL. Not to mention Silver Slugger winner Teoscar Hernandez, Lourdes Gurriel, and newly acquired stars George Springer and Marcus Semien. My only concern is the pitching. Hyun-Jin Ryu is the go-to guy on the Jays, and was a finalist for the 2020 Cy Young. Aside from him, Robbie Ray, Ross Stripling, Nate Pearson and Steven Matz make up a decent threat to hitters, but one that I think isn’t quite ready for a deep run. The Chicago White Sox are another intriguing team that could contend from the AL. Lucas Giolito, Lance Lynn and Dallas Keuchel serve as the core of a solid rotation – one which could lead them deep into the playoffs. The White Sox have plenty of offensive stars who get the job done. 2020 MVP José Abreu, Luis Robert and Tim Anderson are the three main pieces to the great offense. Eloy Jimenez however was ruled out for 6 months – a huge hit to their offensive play. Nonetheless, I expect the White Sox to be in contention, and they are my pick to win the AL.

It’s safe to say that the 2021 MLB season is going to be fun to watch.