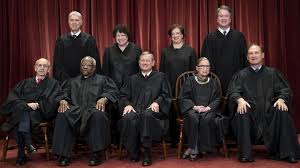 As Joe Biden’s presidency looms there remain unanswered questions about how he plans to address the conservative majority in the Supreme Court. If you watched any of the debates you might have heard the term “court-packing.” You might have also noticed the evasive answers and deflections that both Harris and Biden gave. So why were these questions avoided? And why are so many Americans concerned about the answer?

Amy Coney Barrett’s confirmation to the Supreme Court has cemented a 6-3 conservative majority on the bench. As you might imagine this is concerning to many democrats who are particularly troubled by the threat a conservative majority poses to the ACA and female reproductive rights. The progressive wing of the democratic party is particularly haunted by the spectre of a conservative majority and has thus suggested mitigatory action. Emboldened by Biden’s victory some democrats have suggested expanding the court as a mechanism by which they can rectify the imbalance on the bench. A similar legislative initiative was proposed by FDR in 1937. Yet in the past Biden has been critical of such measures. The question at the forefront of the American consciousnesses: has his position changed? In an interview with 60 minutes, Biden proposed the creation of a bipartisan commission: “I will ask them to, over 180 days, come back to me with recommendations as to how to reform the court system because it’s getting out of whack.” Progressives have long sought to “depoliticize” the federal judicial system. Something, for instance, that was central to Pete Buttigieg’s campaign.

So is it legal? Well, there are a number of different schools of thought but simply put, yes it is. While the constitution specifies that it vests judicial power in a singular court (the Supreme court) it fails to specify a specific number of justices. The primary argument which might justify taking such radical action is that recently the U.S Senate has become a gatekeeper to justices. While previously parties would often consider confirming justices nominated by the opposition this has changed starting with the tea party. In 2016 the Republican-controlled senate refused to consider Obama’s nominee Merrick Garland. The structural issue here is that the Senate is not an accurate representation of America in the sense that rural (predominantly white) states are overrepresented.

The problem of course becomes the precedent which might be set and how it might harm the fabric of our democracy in the future. Accountability is slashed only to the executive branch; in the future, any president would be able to manipulate the number of justices into a majority. I think that as an evident danger requires little explanation.

Ultimately the question becomes (as it will with the filibuster) how far are parties willing to go to cement their own power? How many years of precedent are to be ignored in the pursuit of that power? Personally, I don’t want the answer.