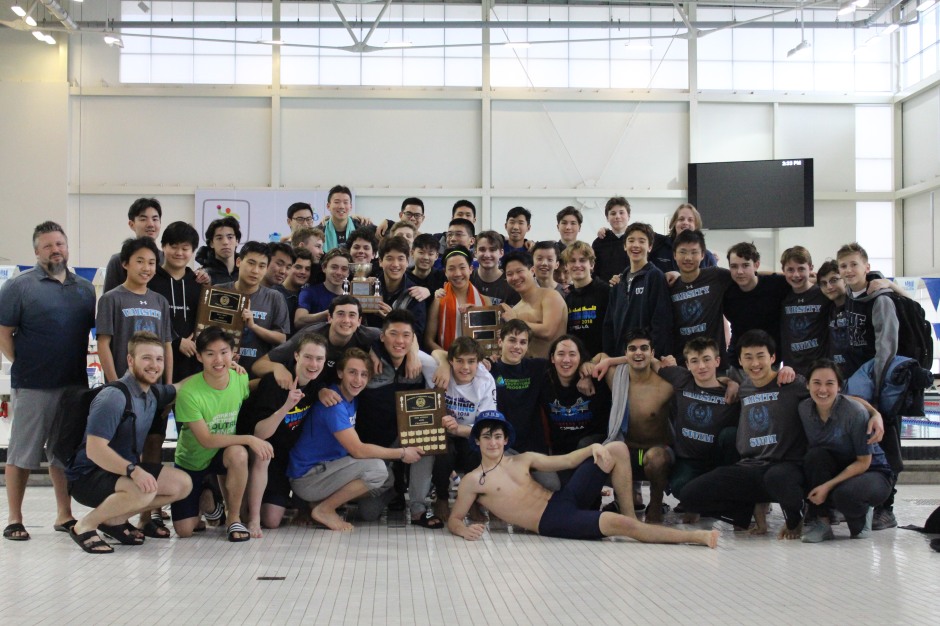 As much as I hate complaining about the conditions of the pool, (the fact that it suspiciously resembles Shrek’s swamp) the swim team deserves more attention. I don’t expect to turn all of you into swimming fanatics through this rant/article, but I hope that it will communicate the experience of swimmers and ignite some sympathy for one of the most successful athletic teams at Upper Canada College.

First, I want to talk about success. I won’t deny that our school actively recognizes our accomplishments, but the sheer impressiveness of those achievements are understated.

This season, UCC swept all Boys titles at CISAA Championships – Junior, Senior, Open, and Overall. This is the 9th straight year that UCC has won the Overall Boy’s title. Keep in mind, this was done by practising in our 81-year-old pool which is less than one-third of the size of the pool we compete at (I did the math). No shade on any other sports teams, but this is like Varsity Hockey winning 9 straight tournaments while practising on a frozen tennis court.

Last year, UCC won the OFSAA Senior Boys title. We did so by almost doubling the points of the second place team. Only one swimmer from that team graduated. Needless to say, there are high expectations this year. You can be a part of the success by cheering on the team at the Toronto Pan Am Sports Centre on March 4th-5th (shameless plug). Jokes aside, the UCC swim team also came third in the Combined division. The next single-sex school was 12th.

Here, I will stop talking about the accomplishments of the swim team. But I want to emphasize the point that UCC swimmers continue to thrive under, well, lousy conditions. This is due to our stellar coaching staff and the dedication of every athlete.

I want to discuss why swimming is so irrelevant, both at our school and in society. Why is it that people only care about the sport every four years? Don’t worry. It’s not your fault.

There are a few reasons for this.

Firstly, Competitive swimming is not fun. Unlike basketball or soccer, which are enjoyable to play casually, no one wants to swim 100 meters of butterfly for fun. This means that it is hard for people to have an interest in swimming and watch the sport. Even if someone only plays shinny, the pure idea of hockey is fun and can get one interested in watching the NHL.

Secondly, There is a lack of accessibility to swimming. Pools are hard to find, and equipment can be expensive. Also, people generally do not want to swim at 6:30 in the morning in the middle of January. In comparison, after-school basketball practices don’t sound too bad.

Lastly, success is hard to come by for individual athletes. In swimming, there is usually only one championship meet for the season. Most swimmers have their entire season’s work riding on a couple of races. In this sense, it is hard to imagine how people can find swimming rewarding when, after 3 months of work, your only achievement is dropping 0.3 seconds on a race. While I recognize that swimming, or any sport for that matter, is not solely about achievements, but rather about the community of athletes and personal goals, it can be hard for people to find success in swimming.

What I’m trying to say is this: You don’t need to have an interest in swimming, but show it the same respect you would to any other Varsity team. I didn’t write this for personal glory and compliments. What I want is for the entire team to receive the attention they deserve. Because they, like you, have worked very hard for their accomplishments.