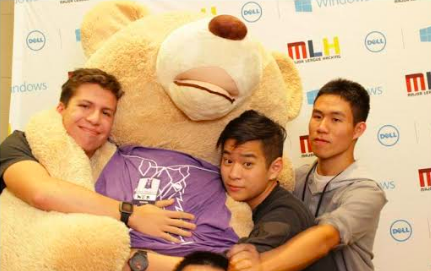 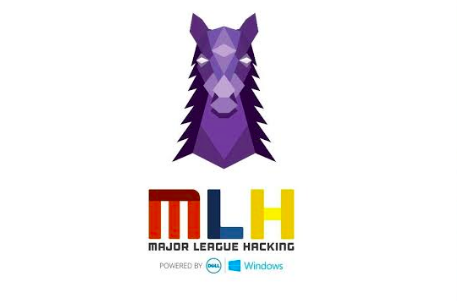 For the uninitiated a hackathon is a wild thing.  You get a few hundred hackers in the same room, tell them to start from scratch, give them obscene amounts of caffeine, free crap, some technology, and then wait 36 hours. There’s a booth set up handing out unlimited energy drinks, that switches to soylent during the day (for a brief period they even had caffeinated soylent), and has free food every 8 hours. From start to finish no one sleeps (getting more than 10 hours is considered almost rude).   It’s a marathon of development. When the time’s up what’s left is raw creation. Walking down the pitch hall, a hundred different teams hawk their ideas at you: an affordable braille printer, a robot teaching itself Tetris, a sign language to english translator, an online pawnshop, a smart stress ball, and so much more. Then some big tech giants walk around and give out free stuff. The more they like an idea, the better the stuff. OK idea? Here, have a $100 gift card. Pretty good? Take a drone. Great? Brand new 3D printer. Excellent? They hire you on the spot.

Let’s get this straight; the biggest tech companies in the world are giving a bunch of student’s food, a lab, whatever tech they want, and prizes at the end, all for no cost?  It seems really weird to someone outside the “hacker” community. I want to clear up something right away; a hacker is not what you think it is. It is not a fat guy living in his mother’s basement in front of dark a screen. They are the modern day equivalent of the mad scientist. In the early 00’s when minorities were reclaiming derogatory terms, hacker was taken back too.  Go to Hack-a-day, Major League Hacking Hacker News.  No one is talking about “hacking the cyberspace”, or “doxing the interwebs”.  They’re discussing home-built citizen science labs, founding a startup, or the politics of privacy.  Self identified hackers are people who go out into the world and make awesome inventions out of civilian resources. The modern day hacker is someone willing to look at the world, take it apart, and try to put it back together a little better.

The hackathon started with a motivational speech that ended with “Let’s take things apart, and build cool � “. When we got back to the build hall, it was live with conversation. No one was competing. Everyone was helping everyone with everything. We all had one goal in mind: build something awesome. It wasn’t about the prize at the end, it was about learning about something so crazy you didn’t even know it existed an hour ago. The culture at these events is extraordinary. Whenever someone fist pumps the air because they got something working, there’s a collective roar of encouragement. Whenever someone curses under their breath, three strangers collapse on their location to try and help. When people crash at 4am to take 2 hour naps, there’s always someone else on a couch to pass out with. Whenever someone just gets fed up with hacking, there’s always a friendly game of hacky sac to help them unwind. No one is better than anyone else, we’re all here because we love it.

I was struggling with a problem, so I asked the guy down the table to help. He looked familiar, but it was only after that I realized he is a superstar in the hacker world. While he was helping me, though, he was just another caffeine fuelled hacker on a quest to solve a problem. Even the sponsors send a few of their brightest employees to wander among us and help. The sponsors are the money behind a hackathon. They pay the transportation, food, and basically every other expense of all the hackers. From the time I stepped on the bus to Western Friday afternoon, till I stepped off Sunday night, I didn’t pay a cent. In fact, I came back with three t-shirts, four bottle openers, two plushes, two t-shirts, a VR headset, a backpack, a bottle of soylent (it’s not as good as you think, but it gets the job done), and half a dozen stickers more than I started with. At this point any astute person scratches their head. It’s too good to be true, there’s no such thing as a free lunch. The answer is recruitment. The sponsors are basically creating a playing field that gives the best and brightest a chance to shine. Stapled inside of every free t-shirt is a little “Join Us!” pamphlet. The companies push their ludicrous benefits (6 digit signing bonus, unlimited vacation days, tons of free stuff), with the offer of continuing the joy of building.

The guy sitting next to me on the way back won a prize, and we got to talking. As he was walking off stage, the sponsor handing him the prize offered him a six figure salary with a hefty relocation fee, starting immediately. The poor kid is only a 2nd year uni student, but the market for good tech talent is so scoured that these are the tactics that are being used. Even I got hit by desperate recruiters a couple times, and had to respectfully decline. There was rumour that one team sold their project for a solid chunk of money, and landed great jobs before the award ceremony even started. The world of technology is a weird one, no doubt. Many societal conventions just go out the window, and a new set is adopted. A hackathon is a concentrated maelstrom of creation that is the beating heart of hacking culture. I racked my brain for hours trying to come up with a comparison, but it is truly unique. To anyone looking to get a peek at the future, I highly recommend checking out a hackathon.