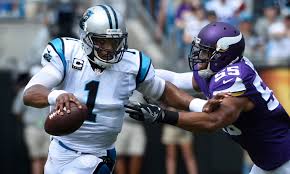 Welcome to “DaCosta’s Down” the new, weekly NFL and UCC football update. In the weekly update I will provide a quick synopsis of certain games, and will change the teams that I write about each week. The scores will always be listed, even if I do not describe that game.

DaCosta’s Down will always come out on Tuesday, so get your personal game synopsis, or questions, in by Monday night (by the latest). Please submit your synopsis or questions here (https://goo.gl/forms/UacRHcR832tEAuWC2)

The Varsity Football team completed their first regular season game with a strong showing from their offence. The game stayed close until the beginning of the third and then the offence put their foot on the gas pedal and the defence settled down. The defence line had pressure all game on a quarterback that was very good. Keeping his team in the game multiple times through his athleticism and big arm.

However, the Blues defence made stops when it mattered. Lead by a core seven of Pearce Gould ©, Sevion DaCosta ©, Trevor Hutcherson ©, Jose Geurra, Yassine Belkhou. With the DBs lead by Hannibal © and retuning member Connor Charton. The offence was well balanced with great play from #28 Rasheed Tucker, #84 Josh Archibald ©, #1 Juwan Edghill, and #6 Jay Williams.

The Blues are back in action this Saturday, October the 1st at St Andrew’s homecoming in a rematch of the 2015 CISAA semi-final’s playoff game. Kickoff is at 3:30pm, so if you can come out to Aurora to watch or watch it through the St. Andrew’s live stream.

“JV Football came out the gates firing, scoring two touchdowns off returns and stuffing TC’s offense, only allowing one first down in the whole first half. It took a while for the Blues offense to get rolling, but they eventually punched it in on the goal line. The special teams, led by returners Chris Wong, Alex Hickman and Adam Menikefs, had an outstanding game scoring five touchdowns (with two of them being called back). The defense shutout the TCS offense with especially good play from defensive leaders Jack Tucker, Dano Realini, Matt Martin and Seb Argamasilla. Overall a great team win and good way to start off the season.” – Max Ward (@maxward38 on insta)

Thanks Max! Catch the Junior varsity team in action at 9:30am this Saturday, October 1st at SAC.

Ryan Allen your AFC Special teams player of the week had 6 punts within the 20. The coaching staff truly displayed why the are a team of consistency, adding in read options and the ability for rookie QB Jacoby Brissett to shine under the big lights. A shutout victory against Vince Wilfork and the Texans moves the Pats to 3-0.

Trevor Siemian is your AFC offensive player of the week.

The best play of the game was a tremendous play by the Green Bay Packers return man Ty Montgomery, the former Stanford player displayed why it is important to know the rules within your league. Watch here: http://dailysnark.com/packers-kick-returner-finds-loophole-nfl-rulebook-exploit-advantage/

ODB vs Josh Norman. Round 2 goes to ODB. Round 3 coming soon! Odell also turned himself into a meme by losing in a match against the kicking net!

In what was the most shocking game of the week. Carson Wentz (your NFC Offensive player of the week) played lights out against a good Steelers defence. This is the third week in a row that I am talking about Carson Wentz because he continues to amaze me. If he keeps this up, he will undoubtedly be the Rookie of the Year. The Philly defence also played well and creds to their DC.

A game that featured two teams that are good at scoring and not the best at stopping other teams. It was a game that, as expected, came down to the wire.

After a very good week 2, Ryan Fitzpatrick through 4 picks and did not look anywhere close to how he has the last two weeks. With his Wide Receiving core and very smart head coach, there is no reason why his team should’ve been this outplayed.

A shootout between two offence heavy teams, in which Atlanta came out on top. I expected NO to win this game at home against a division opponent, but Atlanta had other plans!

No name: Is Stefon Diggs a superstar in the making?

Stefon Diggs was being compared to the early days of Randy Moss during his Vikings tenure. After posting over a hundred yards in each of his first two games, he only got 40 this past week against Carolina. He has 20 catches for 325 yards this year, but only one touchdown. I think he has the ability to be good, but will have to get into the end zone more in his second year; last year he only reached the end zone 4 times in 13 games.

Thank you for tuning in!