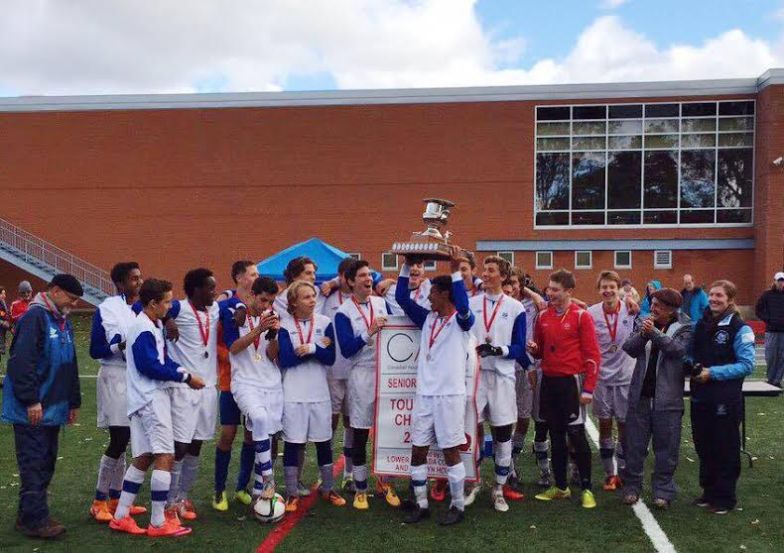 Synopsis: It was a massive fortnight for the First XI squad, recording a key CISAA victory over rivals St Mikes, with strong performances from defenders Mattia Colangelo (VC, IB2) and Darwin Jamal (IB1), in addition to taking the coveted CAIS title. Kal Shaw (C, IB1) had an incredible 10 goals in the tournament, with Seyon Rajadurai (IB1) receiving “Man of the Final” for his goal against Ridley to take the title. On the defensive end, the Blues conceded an unprecedented 0 goals- recording a clean sheet in all their CAIS matches (no doubt a testament to the strong play of new recruit Seth “DK the BK”.)

Synopsis: The frustration from a flurry of missed chances by the Blues was finally quelled by poacher Karman Cheema (IB1) who tapped one in inside a crowded Greenwood box. Despite controlling the rest of the game, only one more goal was added, with Umid Adbduragimov (C, IB2) putting home a creative pass from the mercurial Nicolas Savoy (IB2). A standout performance from Robbie Ash (IB1).

Synopsis: The Blues maintained their undefeated record, with two come-from-behind draws in two games. A big comeback on the road saw them sneak away from the smoke stacks with a valuable league point. Against St Mikes, PJ Bujouves (Y2) slotted the only goal for the squad, with a dominant display in net from Jeremy Zhang (Y2).

Synopsis: A difficult week in league play; however, it saw the Blues take their first point, against an evenly matched Greenwood side. Goalie Norman Struthers (FY) had a strong match. Despite creating chances to score, the squad was only able to put home the one goal against Trinity in an intense affair. Former SC Telstar and Canada midfielder and current coach Andrew Ornoch will be looking for a rebound performance in the upcoming matches.

Synopsis: Two big wins for the Blues against rivals St Mikes saw the squad go 5 from 5 on the season and take control of the league. In both matches, the Blues attacked and defended well as a team, with Taylor Watt (Y1) dominating on defence, and Aryan Pasricha (Y1) controlling play well in midfield.

Synopsis: The Blues had a tough couple weeks, losing to a dominant SMC side (undefeated on the season), and falling in three matches against OFSAA-quality opposition. Despite being the underdogs in a number of match-ups, the Blues showed their pedigree, with a strong showing against the former OFSAA winners in the last meeting of the day. Notable performances from the vociferous Logan Ye (IB2), Jason Hillier (C, IB2) and libero Theo Christakis (IB2).

Synopsis: The Blues pushed a strong St Mikes side to four sets, with strong performances by Adil Natal (FY) and Raphael Berz (Y2). The squad is still looking for its first win of the season, but can take some momentum going forward after a well-played match, in which the majority of sets were closely contested.

Synopsis: A fantastic result for the Blues saw them come back from 2 sets down to take the win, sending St Mikes back to Loblaws. Both teams went into the match with only one loss, and it was the Blues who capitalised, looking to make headway in the league standings.

Synopsis: Two games against challenging opponents saw the Blues score 8 TDs of their own, only to concede even more. A dynamic SAC offence was hard to stop, despite strong peformances on defence by Clayton Jeffrey (C, IB2) and Sam Beqaj (IB2). Trinity brought the same attacking threat, making some big plays at key times in the game resulting to defeat for the Blues. Strong perforamnces from the nimble Justin Wong (IB2), Gabriel Boucher (IB2) and the gunslinging Aidan Power (C, IB2).

Synopsis: Happy to get a taste of the big city, a strong Trinity side was tough to put away, despite the Blues scoring a TD of their own, off a pass from QB Jack Prince (FY). The Blues now fall to a 1 – 2 record on the season.

Result: 10th Place Finish at the Head of the Charles Regatta

Synopsis: At the prestigious Head of the Charles in Boston, the Varsity 4+, led by the inspiring James “Neon Deion” Griffith, powered their way to a 10th place finish overall. This put them as the second fastest boat in North America, and the fastest ‘light-weight’ boat, as it was an ‘open weight event’.

There is no doubting the passion at UCC, for UCC. “Blue-Fever” has been reverberating throughout the school ever since James Griffith pulled on the iconic Cookie suit for the A-Day pump-up assembly. However, this past Friday at the highly anticipated ‘Friday Night Lights’ varsity football match, the solidarity among UCC students has to be questioned. It started off alright, with students of all grades being their traditional rowdy selves and supporting their peer. As the game went on, the support gradually fizzled out. In fact, in the last few minutes of the fourth quarter, there were only a handful of students left supporting their brothers in Blue (or rather, white). Not only is it embarrassing for us as a school, but, as someone who has experienced this before as an athlete, it has to feel terrible for those on the team. Late in the fourth quarter, while the game was still within reach for the Blues, that’s when they needed the support the most. The non-existent ‘Blue Zone’ housed ten students at most at this stage in the game, and for the football team- that is simply demoralising. I know a lot of the whole “Blue Army” factor and support is very much related to convenience- and sure, maybe it isn’t the most enjoyable to be standing out in the freezing cold at 9:45pm when you’d rather be elsewhere- but come on, you already made the effort to be there- wait it out, and support your peers. And to all the IB2s- make the most of it. There aren’t many high schools out there like UCC, and the football team goes to a lot (note- a lot) of effort to be the best that they can. Maybe it’s the fact that there’s another game next Friday- or maybe you just couldn’t care less, and the allure of a warm house and the Jays game (or whatever else) was too compelling- but let’s do better. At the very least, ask yourself if you’d appreciate a big, rollicking, loud, (respectful) group of guys (maybe even an army) supporting you at whatever endeavour you pursue- I know I would.