As the headlines across America continue to read “White cop kills unarmed black man”, it becomes clear that the world we live in has not changed. This persecution of black men and women has failed to change, worse, we have become blind to it. We believe we live in a world of equality, a world where every man and woman within America has an equal opportunity. Yet, this is fundamentally wrong. Racism has become institutionalized, and democracy, the thing we fought so hard for, is being used against a large part of the population.

Before they are even born, black children are already faced with a statistical disadvantage. 33.2% of all black families with children under 18 years old are under the poverty line. Worse, 50% of single female mothers are under this poverty line. Just to be clear, the poverty line was created in the 1930’s, to represent if one has enough money for BASIC sustenance based off of the traditional minimum income. This has only been adjusted for inflation, while the minimum wage has barely risen. If one is even near the poverty line, it is already terrifying. Comparing this to 18% under the poverty line in families of all races with single mothers (including black families) it becomes immediately clear just how bad the situation is in America. A nation that preaches equality, freedom, and democracy so vehemently should not have a population of second-class citizens. Before these people are even born, they are already forced into less than opportune situations, stemming from a lack of pro-activity within government. Time and time again, programs that have supported those living in poverty are cut in favour of spending it on bailing out banks, or fighting proxy conflicts in the middle east. Just last year, President Barack Obama passed a bill cutting food stamps by $8.7 billion, leaving countless families from a significantly larger black demographic (over 6 million households) without food. 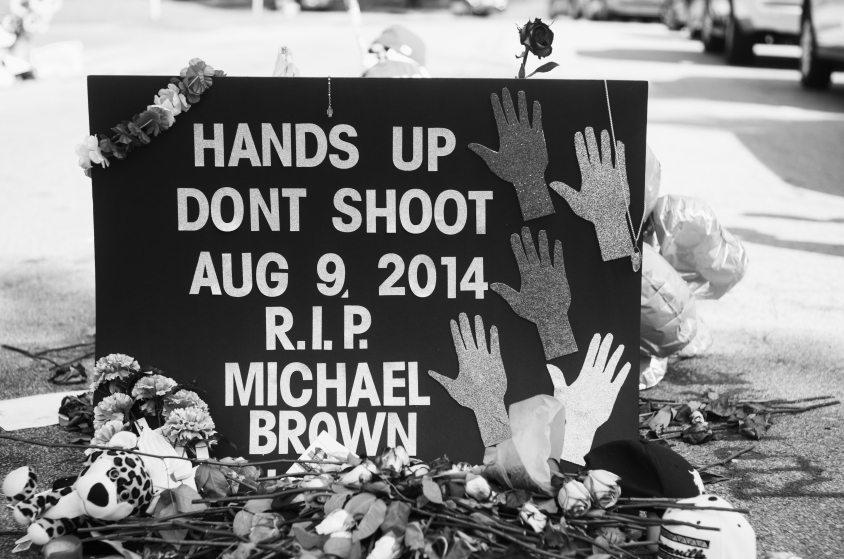 Furthermore, besides being left without food, these disadvantaged children are almost always forced into a worse education. Close to 50% of black students will attend “high poverty” schools in comparison to 5% of white students. Worse, students at these “high poverty” and minority filled schools receive significantly less funding per pupil from states in comparison to schools with less minorities. A system designed to teach, instil positive values, and supposedly “not segregate” has effectively segregated the majority of black students into schools where they will have exponentially less opportunity.  The urban institute describes this as being so bad that “in some metropolitan areas, the racial concentration of school poverty is so severe that black and white students effectively attend two different school systems.” 61 years after the Brown v. Board of Education ruling, deeming “separate educational facilities as inherently unequal,” little has been done to change this.

Consequently, knowing that black children will be statistically poorer, and statistically have a worse education, it is much easier to understand why our news headlines are plagued with the message “White cop kills unarmed black man”. A study by UC-Berkley on the “the Effect of Education on Crime”, shows that education and prison sentence are inversely proportional, and as there is more opportunity for education, along with better education, students commit much exponentially less crime. They conclude that as 12-13% of the population is black, yet 40% of those incarcerated are black, that this difference in incarceration is due to the abysmal education these students are given. If you have never been given the opportunity to learn, given the ability to try and make a difference in your life, it becomes easy to make spur of the moment decisions leading to crime.

Similarly, if your job is to stop crime, and you know that statistically, one population commits more crime than another, it becomes easy to see the world as black and white. More importantly, it becomes easier to justify these terrible actions to yourself, dehumanizing these disadvantaged humans. Yes, if you are a bully, you can become a paid thug by becoming a police officer. Yes, there is a disgusting disparity between the amount of arrests and worse, killings by police officers, between these two populations within the US. In spite of this, there are good people who become law enforcement agents because they believe in the law and protecting civilians. However, these good people’s actions (supporting the law) are overshadowed by the crimes committed by other “police officers”.

For this reason, all the compounding issues that have been created over the years since segregation ended are beginning to foment, growing with each murder. The deaths of Trayvon Martin, Eric Garner, Michael Brown, Yvette Smith, Mckenzie Cochran, Jordan Baker, Andy Lopez, Miram Carey, Carols Alcis, Deion Fludd, Kimani Gray, and countless other known and unknown people have served as a sort of martyrdom, bringing national attention to an issue that has been around since America’s establishment.

At last, after 61 years, this issue of institutionalized racism is becoming prominent again, but for the same atrocities that were discussed 61 years ago. Black people are being killed without reason, students are segregated and given less opportunity for education, while families are stuck under the poverty line with no way out. The issue of “white cops killing black men” is just the peeling of a scab on the deep, grievous wound of segregation and racism. For change to come, there needs to be fundamental reform in all facets of government in how to deal with this racial inequality. Sadly, with the leader of the free world, the first black president in the history of America, not passing laws to support this disadvantaged population. What hope is there? Ironically, in the words of President Obama, “Change will not come if we wait for some other person or some other time. We are the ones we’ve been waiting for. We are the change that we seek.” Continue to rally, continue to protest, continue to keep the peace, and once we cannot be ignored, change will come.