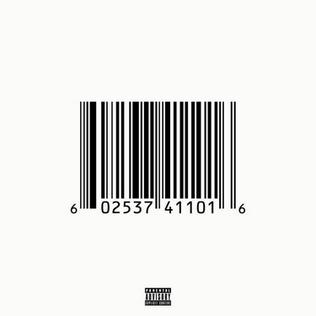 Was I the only one who tried scanning the bar code?

Has there ever been any hesitation that Pusha T is a standout rapper? As one half of the acclaimed rap duo Clipse, Pusha T has always been putting out solid albums for over a decade. Recently, though, he has been exploring past the boundaries of Clipse and in 2010, he signed to Kanye West’s label, GOOD Music. Ever since, he has made countless features and has been the highlight of many tracks such as Runaway, Mercy, and New God Flow. So, how does Pusha T’s major label debut fare?

Sonically, Pusha is as eloquent and rejuvenated as before. He raps with a certain vigour and assertiveness that no other rapper can emulate; just listen to his signature Yugh! ad-lib. Although his flow is nothing novel, the way he manipulates his voice bodes well with all of the beats he raps on. As for the lyrics, Pusha brings the same braggadocio style of rap he has been noted for throughout his rap career. However he also explores other themes such as pain, his relationship with Clipse member, No Malice, and his coke-dealing past. Throughout all this, Pusha employs a copious amount of play on words and literary effects while never making them corny.

Perhaps the strongest part of this album is the production. Even before listening to the album, just by knowing that Kanye West is executive producer, we can expect an amazing selection of beats – he does not disappoint. The best production is in fact by Mr. West himself. He provides some of the darkest and eccentric beats I have heard that sound like a cross over between his discography. On Hold On, Pusha raps over a smorgasbord of Kanye’s auto-tuned groans, while on Pain, he raps over dense-sounding drums and a beautiful piano lick (might I say beautiful, dark, and twisted?). Other beats by other producers such as Clipse-collaborator Pharell Williams are ear candy too. The layers of vocals on S.N.I.T.C.H. and the bubbling notes on Suicide are equally as eccentric as Kanye’s beats.

One of the interesting aspects on this album are the various features. On Nosetalgia, Kendrick Lamar, as usual, provides a poignant and lyrically deft verse. Rick Ross even surprises on the album spitting a strong verse on Hold On with his trademark husky flow. On 40 Acres, The-Dream adds an ethereal element to the song with his airy voice over synths that sound like they came off of Alphaville’s classic Forever Young. Other than those three, though, the features bring the album down from what could have been a classic album. The hooks by Future and Chris Brown, the latter who makes Sweet Serenade sound like a pseudo-club jam, are auditory guano. Up and coming R&B stars such as Miguel or Frank Ocean would have been better suited for this opportunity. And what happened to the Get Lucky Pharell Williams voice we came to know and love? Instead Pharrell’s voice is drowned in auto-tune and seems out of place on the closing track. And alas My Name is My Name suffers from the classic GOOD Music curse. With every GOOD Music project, rappers 2 Chainz and Big Sean have to hop along to bring it down. Look at track 9, Who I Am – both of the rappers deliver appalling sub-par verses that make Pusha-T seem like the Tiger Woods of rap.

Although the weak features blemish My Name Is My Name, it is still a stellar album. I would, without a doubt, consider it to be GOOD Music’s best project so far, easily beating albums like Indicud and Cruel Summer. I have high hopes for future Pusha T projects and I look forward to his future collaborations with Kanye; hopefully with less GOOD Music members, though. Pusha T truly is putting numbers on the boards.