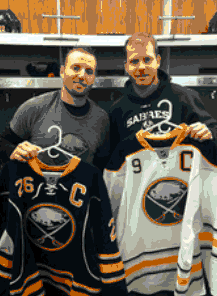 Recently, the Buffalo Sabres decided to fill the void left by Jason Pominville in their leadership group by naming Steve Ott and Thomas Vanek as co-captains, despite the fact that this is clearly not permitted.

According to the NHL rulebook:

6.1 Captain – One Captain shall be appointed by each team, and he alone shall have the privilege of discussing with the Referee any questions relating to interpretation of rules which may arise during the progress of a game. He shall wear the letter “C,” approximately three inches (3”) in height and in contrasting color, in a conspicuous position on the front of his sweater. No co-Captains are permitted. 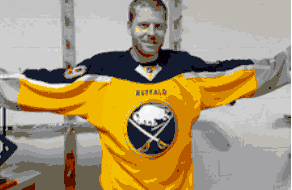 Although such a ridiculous decision is expected out of a club who introduced a new two-tone yellow jersey just a month ago, the fact is that this has become a trend in the league. Following the announcement of the new Buffalo co-captains, the Oilers announced Jordan Eberle, Sam Gagner, Taylor Hall, Ryan Nugent-Hopkins, Nick Schultz and Ryan Smyth as assistant captains (In addition to new captain Andrew Ference).

It appears that after their plan to simply win the lottery failed the Oilers are going to go in a new direction and rebuild Buffalo style.

Jokes aside, this new style of “group leadership”, is a new concept in sports and is one that parallels the shift in leadership that has been seen over time in society. The move from individual to groups has been seen in governments that shifted from kings and tyrants to elected groups of representatives and businesses from CEO and Owners to Boards of Governors. Sadly it appears hockey teams will shift from great captains like Messier, Yzerman and Sundin to groups of captains like Buffalo’s co-captains and the Edmonton seven. While it would be interesting to see how this change will effect the development of these young teams, I believe the NHL should enforce their extremely clear rule and force Buffalo to strip one of the players of their captaincy (the home/away captain is a clear circumvention of the rule).

With all the controversy surrounding these announcements hidden in the hype of season openers, there is one question that still needs to be answered; If one of these teams defeats the odds and wins the Stanley Cup, which captain is awarded the cup?