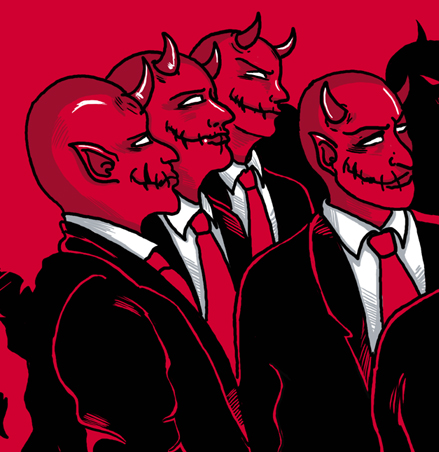 Jean-Paul Sartre’s classic work, ‘No Exit,’ is surely one of the more challenging plays to produce at the secondary school level, with its intimate cast, weighty themes and a plot whose power hinges almost entirely on the performances of the leads. And yet the joint UCC-BSS production of 2010 managed to overcome each of these trials with generally wonderful results, providing a thoughtful and thoroughly engaging piece of theatre.

Concerning itself with the postmortem travails of three sinners condemned to a highly unusual form of psychological perdition, ‘No Exit’ offers an acute character study on human relationships through the lens of a stark existential crisis. The piece opens with little fanfare – a spark piercing the blackness. And immediately, we are treated to a convincing turn from Jonah Freedman (IB2) as the Valet; here, he provides acerbic humour and the necessary exposition to allow the central drama to unfold without a hitch. Moreover, as Hell’s singular representative in the play, he contributes to the piece’s intriguing interpretation of Hades that is less the commonly visualized hyperbolic barbecue pit than a rather nondescript, if sprawling, hotel complex. For it is one of the great strengths of the play to convince the audience that this bland, empty accommodation offers a potentially harsher punishment than fire and brimstone – here, Hell’s denizens face an eternity of tortured introspection, facilitated not by isolation, but by the company in which they find themselves.

And so into this unnervingly spotlight step Joseph Garcin (Jake Danto-Clancy, IB2), Inez Serrano (Carolyn Scott, BSS) and Estelle Rigault (Rachel Stone), three individuals with haunting darkness in their pasts. Each actor is utterly at home in their character – something that is crucial in a piece which strips away any distractions and leaves its performers entirely exposed. Danto-Clancy lends an earnest pathos to Garcin’s brutish, self-doubting womanizer, shifting from macho to melancholy like a circus contortionist as the character oscillates in agonized self-scrutiny. The stark, manipulative figure of Inez – almost painfully despicable at first – is given a brooding, if rather blunted, complexity by Scott. And Stone brings panache and charm to her role as Estelle, aptly portraying the fluttering vulnerability and beauty that belie the socialite’s callous, narcissistic interior.

Yet it is not so much the individual characters that define this piece as it is the interactions between them. As the new arrivals acquaint themselves with their eternal cellmates, they begin relationships that soon evolve from courteous codes of conduct for surviving eternity to probing cycles of desire, frustration and indecision in a search for moral catharsis. Tormented not by flaming brands and demons but by their own inhibitions, regrets and longings, as well as those of their fellow internees, the damned souls are each forced to acknowledge and examine the ugliness within themselves. And importantly, these central emotional struggles manifest poignantly due to the impressive performances of the leads and careful sculpting on the part of director Rachel Metalin.

The production is not without faults however; there are several moments when the pace stalls, the plot loses momentum, and awkwardly placed words enter a kind of suspended animation above the stage, but these are thankfully the exception rather than the rule. By infusing a sense of dynamism and physicality into its characters’ interactions, ‘No Exit’ is generally able to avoid the danger of drowning its audience in stagnant dialogue that its verbally propelled structure presents. And the minimalist set, lit with cleverly effective coloured lighting and consisting merely of a few beds, only enhances the audience’s appreciation of the mind-numbing intellectual and moral void that envelops the protagonists due to the stark blandness it typifies.

It is a testament to the power of ‘No Exit’ that one cannot help but feel exhausted, both mentally and emotionally, by the piece’s close. Indeed, perhaps this production’s greatest triumph is to allow, or even necessitate, the wholesale engagement of the audience in the labyrinthine mental journey the characters make into their own psyche over the course of the play. In its moving depiction of flawed, but ultimately human, individuals, the work casts a glaring light on the darker elements of humanity while also providing a nuanced examination of the relationships that define and shape our identities. By the end, the characters seem to have reached an impasse in their attempts to attain atonement; they find themselves locked in a prison of their own minds, each the other’s jailor. And ultimately, the audience emerges in a similar condition – faintly clutching the hope of redeeming human virtue, but painfully aware of the sordid bit of hell lurking within all of us.