Justin Trudeau has secured a third term as Prime Minister of Canada, after defeating Conservative Leader Erin O’Toole on Monday night, despite losing the popular vote for the second straight year. Trudeau’s Liberals won 158 seats, the Conservatives won 119 seats, the Bloc Québécois won 34 seats, the NDP won 25 seats, and the Green party won 2 seats. This will give Trudeau a minority government, as his party failed to reach the 170 threshold necessary to achieve a majority government. 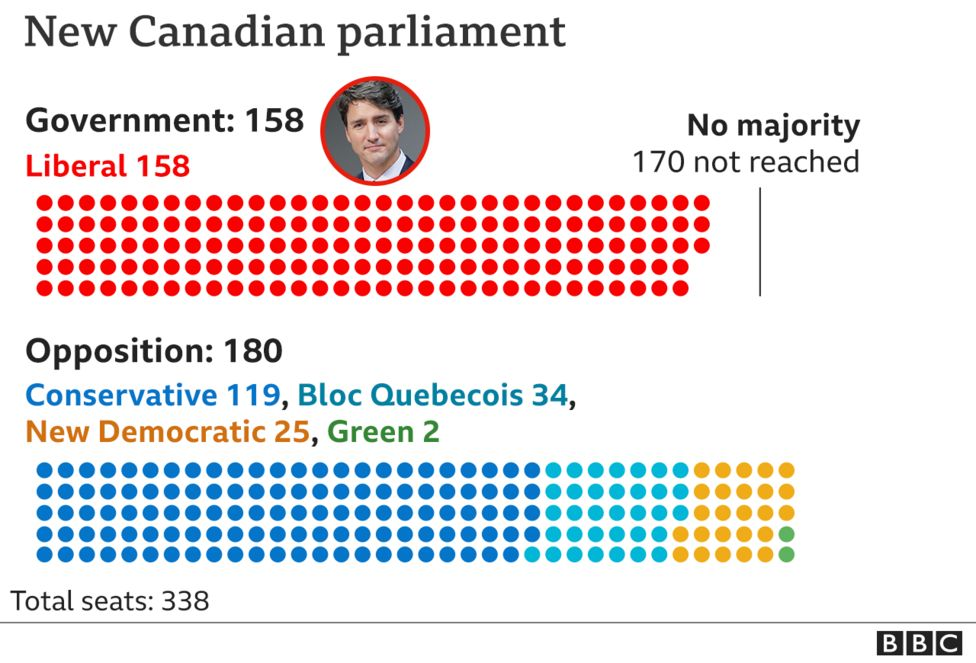 “You are sending us back to work with a clear mandate to get Canada through this pandemic and to the brighter days ahead. My friends, that’s exactly what we are ready to do,” Trudeau told supporters from Montreal early Tuesday.

“What we’ve seen tonight is that millions of Canadians have chosen a progressive plan. Some have talked about division, but that’s not what I see. That’s not what I’ve seen these past weeks across the country,” Trudeau said.

In calling the snap election in mid-August, just two years into his minority government, Trudeau was hoping for a majority, betting he could capitalize on his vaccine rollout and handling of the pandemic.

Early polling favoured the Liberals, but that quickly changed to a statistical tie with the Conservatives, according to national tracking surveys.

Major topics this election included gun control, housing affordability, climate change and the pandemic, but Trudeau ran into a problem: most Canadians didn’t see the need for this election, and holding an election that will cost the country over $600 million during a global pandemic has angered voters.

Conservative leader Erin O’Toole sought to capitalize on this, and called the election a “quick power grab.”

“Five weeks ago Mr Trudeau asked for a majority, he said the minority parliament was ‘unworkable.’ But tonight, Canadians did not give Mr Trudeau the majority mandate he wanted,” O’Toole said. “In fact, Canadians sent him back with another minority at the cost of $600 million Canadian dollars and deeper divisions in our great country.”

During the campaign, O’Toole attacked Trudeau in a way uncommon in Canadian politics.

Trudeau responded in a similarly robust fashion, saying: “I’m going to let him and his proxies and the anti-vaxxer movement and the gun lobby and the anti-choice crowd continue to attack me, fine. I’m going to stay focused on Canadians.”

Among voters, the pandemic has sparked fury in a small but vocal group of people who oppose COVID-19 requirements, particularly vaccine and mask mandates. Earlier this month, a protester threw gravel at Trudeau at a campaign event.

A day after the election, O’Toole said in a speech that he’ll “work tirelessly” to expand the party’s influence.

“We didn’t get the results we hoped for,” he said, before going on to praise new members of parliament.

Although his future as leader of the Conservative Party is uncertain after losing the election, O’Toole dismissed questions on his future in the party. “We’re going to undertake a review,” Mr O’Toole told reporters. “That’s what a leader does. Make sure we’re prepared for next time.”

O’Toole’s campaign resulted in roughly the same results as it did in 2019 under the Conservative’s previous leader, Andrew Scheer, who resigned as leader after failing to defeat Trudeau.
In his speech, he continued to attack his rival, saying “I think we deserve better than Mr Trudeau.” He also continued to emphasize his belief that Trudeau shouldn’t have called an election during the pandemic.

Early voter turnout results indicate that just over 58% of Canadians cast a ballot. While that number could rise, it’s lower than the last election, when 67% of eligible voters showed up to vote.

In the end, Justin Trudeau’s decision to call an election backfired, as he failed to get a majority government, but he managed to cling onto power, despite losing the popular vote for the second consecutive year.