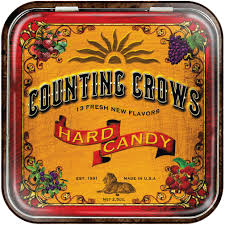 When I was thirteen, my father approached me about the possibility of moving to Toronto. Growing complacent in my middle school years, I felt ready for change. I thought, why not? However, when I came to Canada, I realized how different things were. After growing up in Ohio, it was unnerving to walk a big city. I had trouble finding peace, often which I associated with aloneness. I felt uprooted, out of control. Struggling away from Chagrin Falls, one constant was music. Songs brought back memories of home and the promise of better times. I remember few songs when my old man would turn up on his radio, but whenever Hard Candy by Counting Crows came on, he’d crank the volume and drum his hands across the steering wheel like a man possessed. I sang along, basking in my father’s joy and the song’s melody. Never quite focused on the words of the song, being swept away in the moment.

One day I queued a Counting Crows playlist on my phone as I hopped on the subway heading downtown. I smiled when Hard Candy came on, reminiscing about drives through the Ohioan countryside with my dad. But I listened to the words and started to understand what Duritz was singing. The title is a metaphor. The candy relieves his emotions, but only temporarily. “And when you wake the morning covers you with light, and it makes you feel all right, but it’s just the same hard candy you’re remembering again.” His dreams about past memories make him feel good when he wakes up, but then reality hits him, and it ends up making him feel worse. The main character spends the song looking back on the memories he had with his girlfriend, which makes him feel good at the moment but overall prevents him from moving on. “There isn’t any sweetness in the dreaming.”

I can relate to what Duritz is saying as I often think about my time in Ohio with regret, longing, even hope. I know in the future there will be more change, and that dwelling the good times is inevitable. However, living vicariously through those moments is not sustainable, and will sometimes leave you feeling worse. It’s sweet but bad for you, just like hard candy. “But it’s just the same hard candy you’re remembering again…”