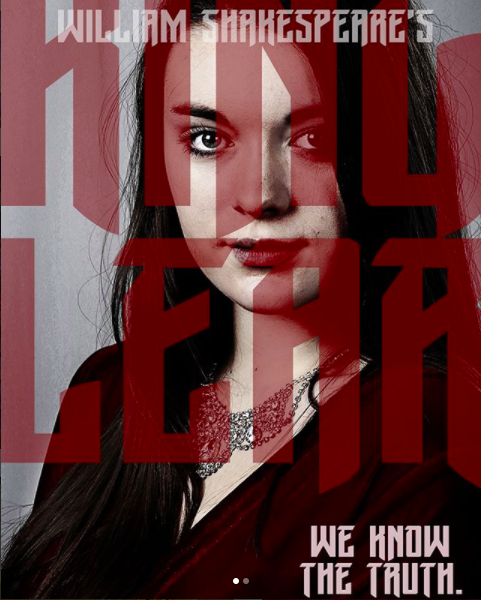 This week, the UCC/BSS/NT production of Shakespeare’s King Lear has finally gone up. The actors, directors, and stage crew have been hard at work and after experiencing it first hand, I can tell you that it has paid off. I highly recommend seeing it as I was blown away by the amazing acting. Don’t get me wrong, I still had no idea what was going on, but I thoroughly enjoyed it.

Without giving too much away (don’t worry, I’m sure you won’t understand most of it anyways), I’ll provide a brief summary. King Lear (Devin Lee) is getting old and decides to divide up his land among his three daughters and their respective suitors. While doing this, he seeks adoration from his daughters. The oldest daughter, Goneril (Ava Morris) showers him with praise, followed by the second oldest sister Regan (Kathryn Fraser), who one ups her. However, the youngest daughter, Cordelia (Anya Friedrich), decides not to play into her father’s quest for affection and states that she loves him as much as any daughter should. Furious, Lear basically tells her to buzz off and divides his kingdom amongst the other two daughters. This marks the downward trend of the play, which I can confirm is not too cheerful. Other key characters include Gloucester (Konstantinos Tsatsos) and his two sons: Edgar (Sarosh Waheed) and Edmund (Sabian Velji) as well as the King’s loyal aid Kent (Conrad Mahoney).

Sabian gives a brilliant performance as the main antagonist, trying to gain as much power as he can, screwing over literally everyone in the process. When watching his soliloquies, I’ll admit I was just a little bit… terrified. Furthermore, Devin is also fantastic as Lear, commanding all the attention in the room during his powerful breakdowns (something that is not uncommon for Lear). Besides these two, the rest of the cast is also great and Ms. Crawford and Dr. Churchward have truly done an excellent job in putting the show together.

Again, if you have not seen the production, please try and make it out. The final show is on Saturday the 24th of February at 7:30 pm and you can buy tickets at the door. It’s many of the Year 12 actors’ last classical play and it is not one you want to miss!